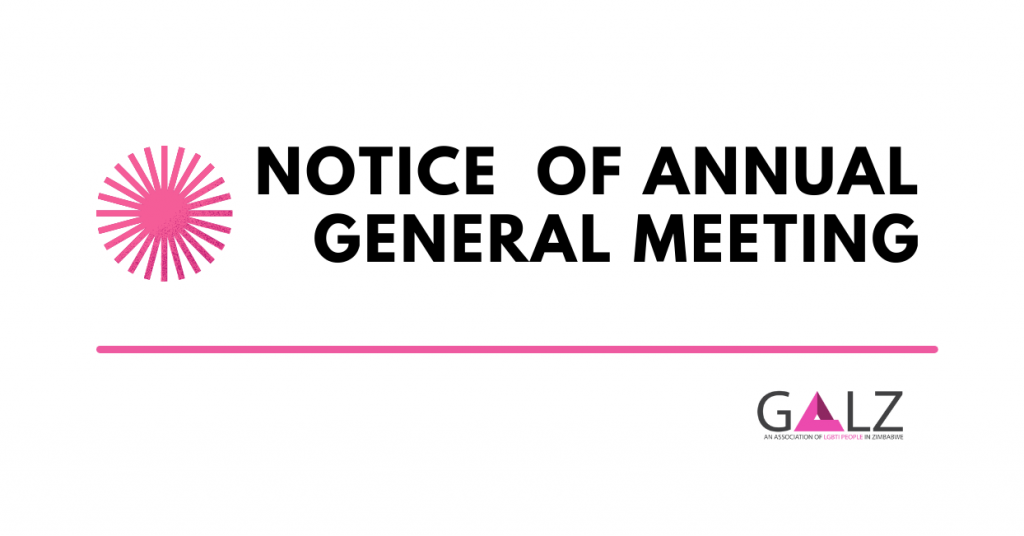 Notice is hereby given of the annual general meeting of members of GALZ An Association of LGBTI People in Zimbabwe (hereafter referred to as GALZ) to be conducted simultaneously via electronic means and in person subject to compliance with National Covid-19 regulations at 9am (Central African Time) on Saturday, 4 December 2021. This annual general […]

Zimbabwe LGBTIQ+ sector statement on the cancellation of Somizi Mhlongo’s visit to Zimbabwe.

Zimbabwe LGBTIQ+ sector statement on the cancellation of Somizi Mhlongo’s visit to Zimbabwe. We are an association of organisations protecting, promoting and representing the rights of LGBTIQ+ people in Zimbabwe. Yes, we exist. We do not have a relationship with Somizi Mhlongo or the event organizers, but have observed the shameful conversations and conduct around […]

Coming out Stronger and Bolder: GALZ Statement on the vandalism of a Billboard

GALZ Statement on the vandalism of a Billboard   On Tuesday 26 October, GALZ received reports of the defacing of a billboard  along Plumtree Road in Bulawayo. The Billboard with the Inscription:  “Umuntu Ngumuntu Dignity rights and respect for all Zimbabweans” was reported vandalised with graffiti inscribed on it, “2023”. GALZ holds in utter contempt […]