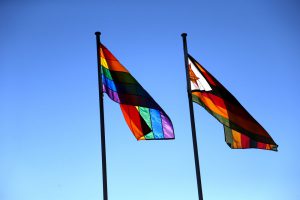 17 May is International Day against Homophobia, Transphobia and Biphobia- IDAHOT.

GALZ joins the rest of the world in commemorating IDAHOT in 2018 under the theme Alliances for Solidarity. Today we celebrate our allies. We acknowledge the role they have played by standing with us and amplifying the voices of marginalized communities in Zimbabwe

LGBTI individuals and organizations have in the past been on the receiving end of human rights violations that are characterized by physical assault; hate speech, intimidation, torture and raids from both state and non-state actors.. These violations have adverse effects on LGBTI individuals in society where they endure stigma, shaming, social and economic exclusion amongst other social ills and usually suffer in silence and remain in the closet.

The lesson Zimbabweans have been well taught by 37 years of ZANU PF governance under Robert Mugabe is that democracy does not lie solely in majority rule. Certain fundamental principles must be adhered to beyond regular elections. The elections must take place under conditions where freedom of speech and expression are respected, the right to life and liberty are preserved, and there is equality before the law and freedom from discrimination. Freedom from discrimination and equality before the law imply minority rights. Without these, tyranny of the majority prevails. Accordingly, any constitutional democracy should bind itself to these fundamental principles.

As GALZ we realise that there needs to be a fundamental change in Zimbabwe’s political culture. The change involves an acceptance that those opposed to one’s policies, who hold different opinions or who are simply different, are not enemies. They deserve equal protection of the law and freedom from violence and discrimination. The building of this new political culture requires determined leadership, leaders who direct their constituents away from the past politics of discrimination and intolerance, leaders who reject attempts to gain votes through hate speech and cheap populism by inciting and exacerbating prejudice against those who are different.

GALZ believes that leaders in Zimbabwe, whether politicians, members of civil society or church leaders, have a duty to lead Zimbabwe towards a new and democratic order. A fully democratic order is one that abandons the politics of hatred and intolerance; it is one that abandons unfair discrimination against any group, regardless of how popular or unpopular the group may be in society.

We call on Zimbabweans to work towards a culture of tolerance where all citizens have the opportunity to express themselves and reach their highest potential as we work on re-building our nation Zimbabwe. //ENDS